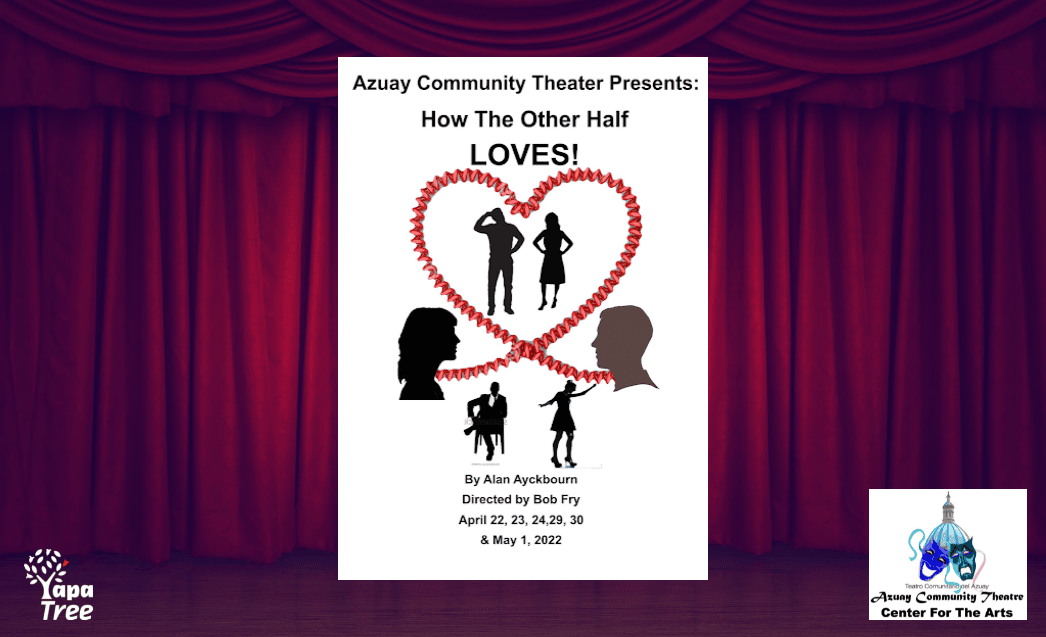 Azuay Community Theater Presents the Comedy, How The Other Half Loves 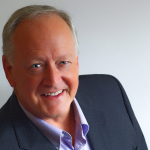 If you enjoy a live stage comedy, get ready for some fun with Azuay Community Theater’s production of How The Other Half Loves by renowned playwright, Alan Ayckbourn. Cuenca resident Bob Fry directs the world-famous farce which opens Friday, April 22 in ACT’s own theater adjacent to the Oro Verde Hotel.

We’re going behind the scenes to give you a sneak peek into the play, the players and the playwright, as well as Cuenca’s own, full-fledged ACT theater company. You’ll also find ticket details below.

Contents show
1 How The Other Half Loves – Fast Facts
2 The Play
3 The Players
4 The Playwright
5 Azuay Community Theater
6 Cast
7 Crew
8 How to get tickets
8.1 Reservations required
8.2 Reserve seats in person through Friday, April 22.
8.3 Tickets are $15 with 3 ways to pay:

How The Other Half Loves – Fast Facts

Like many farces, the play quickly descends into chaos as the 3 married couples reveal just how complicated and intertwined their lives have become. Ayckbourn also entertains us by mingling conversations and characters across apartments that share space and time.

The confusion and awkwardness over the characters’ adulterous secrets creates the comedy as they lie to each other and make hilarious, wrong-headed assumptions about what is really happening.

Of course, the audience is let in on the secrets before some of the characters. So, we laugh and cringe as they struggle to piece together the real story for themselves while trying to cover their tracks.

The full cast and crew list appears below. They have taken on a 9-week rehearsal schedule to bring audiences a polished comedy. Here is a bit of background on some of the cast & crew.

Director Bob Fry takes his fifth ACT directing turn with How The Other Half Loves after arriving in Cuenca in 2015 with a lifetime of theater experience. He appeared in or directed over 75 dinner theater and musical comedy productions over 20+ years in Iowa. Some of Bob’s many US stage credits are musicals like Company, Camelot, Into The Woods and Annie.

Having joined ACT almost immediately upon arrival, he has appeared in numerous ACT productions including Broadway Bound and A Christmas Carol.

Bob Hay (as Frank Foster) hails from Orlando, FL. He arrived in Cuenca just 18 months ago and got busy with ACT right away. His acting career began in 1977, and since then he performed in both professional and community theaters including in the comedy, The Nerd, the musical How to Succeed in Business Without Really Trying, and a role in a show about The Titanic at Orlando’s Titanic Artifact Exhibition.

Playing opposite Bob is Cody Hamilton (Fiona Foster) who moved to Cuenca in 2011 from Prague, Czech Republic. She led a fascinating career as a high school counselor in International Schools located around the world while performing as a member of theatrical unions SAG and AFTRA in TV, Film and onstage in community and professional theaters.

A notable acting newbie is musician and voiceover artist, Mark Deckard who joins the cast to play William Detweiler.

We look forward to featuring the company’s other actors, volunteers and news in future articles.

Sir Alan Ayckbourn  has written more than 80 full length plays, many of which are comedies dealing with married relationships like How The Other Half Loves. Over half of his plays have been produced in London’s West End, The National Theatre in London or The Royal Shakespeare Company. Two reached Broadway and one, Norman Conquest, won a Tony Award for best play in 2009. Ayckbourn also received a Lifetime Achievement Tony in 2010. Some of his other hit plays include A Chorus of Disapproval (1984), Woman in Mind (1985), A Small Family Business’ (1987), House & Garden (1999) and Private Fears in Public Places (2004).

ACT took advantage of the 2 year pandemic to build itself into a robust theater company, complete with a Board of Directors headed by Board President, Paula Bailey, and Treasurer, Ray Lewis. They also installed 3 resident directors. Paula and Ray each bring lifetimes of US theater experience.

As an example of its growth, ACT expanded with ACT Center for the Arts, which provides the theater facility and services to other artistic and entertainment groups. One such event was a concert last September by Northern Roots musical group.

Upcoming events include an ACT fundraiser featuring stand-up comedy by 90-year-old comedian and author, Cork Proctor (May 7th).  And on May 21 Hearts of Gold Foundation hosts its own fundraiser with a return performance by magician, Juan Estrella.

And the company seeks to add volunteers. Everybody is welcome to apply to help with lights, sounds, acting, props, stage management, marketing and publicity, ticket sales and bartending.  Email [email protected] to register your interest. No experience necessary.

Auditions are open and require no preparation or experience. Watch for announcements on YapaTree.com & ACT Social Media.

How to get tickets

Make reservations in person (schedule below) or via email [email protected] Please include your name, performance date, and number of tickets.

We’re looking forward to seeing you there!

Rick Snyder is semi-retired and has loved living in Cuenca since October 2017. His move from Chicago to Cuenca came after a brief career as a financial advisor that followed a 25 year career of managing commercial relationships with some of the best known financial institutions in the U.S. Rick is lead writer for yapatree.com and he volunteers on the Board of Directors of Azuay Community Theater. He is a fan of live theatre and directing, music, great food and cooking, horseback riding and his 2 cats, Flaca and Gorda. He graduated with an MBA in Marketing and Finance from Northwestern University's Kellogg School of Management in 1981.