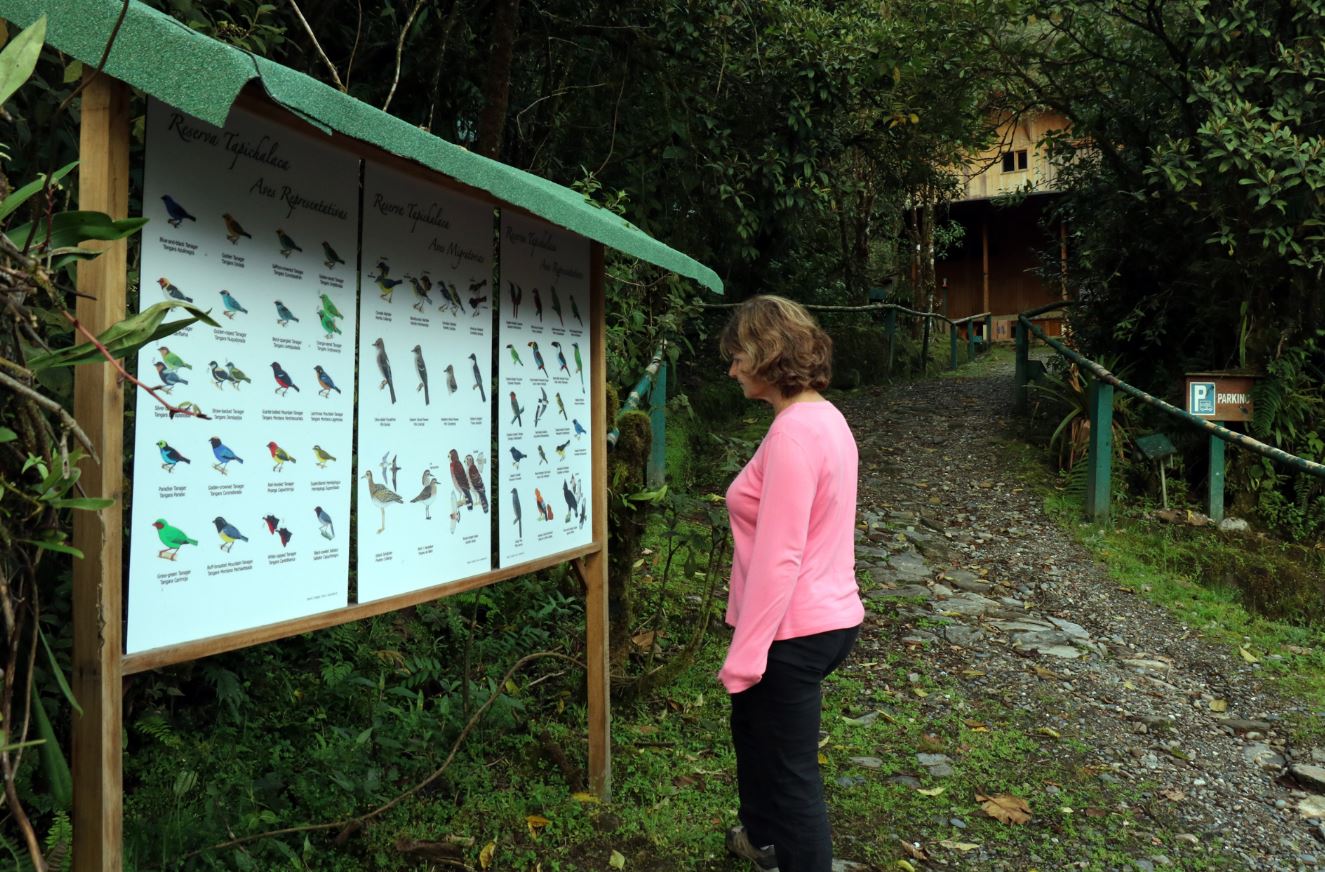 In 1998, a small group of birdwatchers stared intently as a diminutive bird darted along the ground and soon they realized that they had discovered a Jocotoco Antipitta, once thought extinct. The fact that this species was alive and well in Tapichalaca’s cloud-forest in southwest Ecuador galvanized them into action. Within a short time the group founded of one of Ecuador’s leading non-profit conservation groups, the Jocotoco Conservation Foundation, and raised enough money to buy over 12,000 acres of the steamy forest. Soon after, they built a lodge at Tapichalaca and hired a local staff to maintain the reserve. From this humble beginning, the Jocotoco Foundation has steadily expanded to eleven reserves scattered around the country, conserving some of the planet’s most endangered birds and accompanying biodiversity.

You don’t have to be a hard-core bird watcher in order to be mesmerized by the dazzling display of hummingbirds, and various other tropical birds, that swarm to the feeders at the Jocotoco reserves we visited, especially our favorite one, Buenaventura. Although the larger birds provided momentary excitement when they appeared, what truly captured our attention was the never-ending stream of hummingbirds of every size and shape—ranging from tiny brown-green hummers with almost no tail, to impressively large, rainbow-tinted ones, some with tails longer than their body. When a family of long-snouted coatis (related to raccoons) emerged from the nearby forest and clambered onto the porch at Buenaventura searching for a snack, it was clear that we had arrived in an Ecuadorian nature nirvana.

My wife and I discovered this admirable organization while visiting Quito, Ecuador, at the beginning of our four-month tour of South America, and thank goodness we did—through Jocotoco Tours we managed to experience some of the best bird-viewing in the world (Ecuador has 1600 bird species compared to around 800 in the US.)

Our first introduction to this remarkable organization took us to the Yanacocha Reserve, about 45 minutes from Quito. Perched high in the Andes mountains at 11,000 to 13,000 feet, this reserve, like the others, was mainly established to protect critically endangered birds—in this case, the 300 remaining black-breasted puffleg hummingbirds, found nowhere else on earth. In addition to admiring beautiful birds at the feeding stations, we marveled at the diverse shapes, colors and textures of the tropical plants we saw during our hike–my favorite was a plant whose leaves measured nearly five feet across. Following our air-gasping hike, we had tea and a nice lunch in the small restaurant near the visitor’s information center.

The next phase of our Ecuadorian exploration took us to Cuenca, and from there we set out to discover three other Jocotoco reserves, starting with Buenaventura, one of the larger reserves near the southern coast. Although it is possible to fly to Santa Rosa, a town near Buenaventura, we opted for the four-hour drive from Cuenca so we could see more of the countryside. During our 120-mile drive, the landscape changed remarkably, from arid, rocky hillsides covered with cacti and bromeliads (!) to lush jungle-like forests. As we neared our destination, banana groves lined both sides of the road as far as the eye could see.

Buenaventura Reserve felt like an oasis in a vast expanse of tropical forests. After many kilometers of bumpy, winding roads, we relished our clean, wood cabin with its private bathroom and two comfy beds. Outside, on the large deck, a hammock beckoned us to slow down and appreciate the panoramic view of the distant mountains cloaked in deep green foliage. Several times my wife, reposing in the hammock, called out “Doug, come quick, two gorgeous toucans are sitting in the tree close to me,” and I felt lucky to get great photos of them.

With only three cabins and the nearby restaurant and expansive porch, the facility imposed itself little on the surrounding jungle-like landscape. The staff prepared three tasty meals daily, but what set apart this experience was our ability to observe up-close-and-personal so many gorgeous creatures and plants, either from the porch or while hiking.

Nothing in our previous bird-watching experience compared with our ability to gaze, close-up, at the frenetic procession of hummingbirds that whirred around the bright red feeders from morning until evening, providing endless entertainment and exceptional photography opportunities. In fact, bird photographers from around the world, some with astonishingly large lenses, regularly come to photograph birds found nowhere else. Others visitors, however, contentedly click away with their digital phone cameras, or patiently watch with their binoculars.

During our three-day Buenaventura stay, we particularly enjoyed hiking on an 4 km dirt road through the cloud forest, inspecting colorful insects and tropical plants while being serenaded by distant howler monkeys and melodic bird songs. Later our host drove us to a distant part of the reserve to see their new hummingbird park, primarily built to entice local Ecuadorians to better appreciate and conserve their unique natural heritage. I persuaded our visiting American naturalist to take me on a couple of night hikes which opened up a whole new world of exciting discoveries—birds, bugs and spiders that we didn’t see during the day.

During our return drive to Cuenca, we stopped at the 378-acre Yunguilla Reserve, tucked away in the hills at the end of a rough, 5 km dirt road. The reserve’s “forest guard” met us, and machete in hand, he led us across a stream and up a narrow trail into the hills until we reached a small grove of trees harboring two bird feeders. Soon a diminutive gray and white bird, the Pale-headed Brush- Finch appeared, and I was thrilled to witness one of the rarest birds in the world, whose 200 remaining members reside in this one small reserve.

During our stay further south in the town of Vilcabamba, we decided to spend two days at our final Jocotoco reserve, Tapichalaca.  The 75-minute journey, like others we had experienced, led us along a scenic road that offered beautiful panoramas along with the adventure of dodging  occasional landslides, overflowing streams and rocks randomly sitting in the middle of the road. Upon reaching our lodging at the reserve, we donned calf-high rubber boots and marched into the dense cloud forest along soggy trails wrapped in a cloak of tropical plants. Sitting quietly while our guide placed juicy worms on a special spot, soon we were soon treated to a rare, close-up view of a trio of the famed Jocotoco birds. Back at the lodge, most of our time was spent watching, and photographing, the innumerable hummingbirds, most of which hadn’t seen before, especially the most common variety, the Chestnut-breasted Coronets, which resembled prismatic flying jewels.

When I reflect on why we travel, one of the reasons is to experience magic moments in unique places like the nature reserves we visited, and to find those who make a difference in the world, which is exactly what the Jocotoco Conservation Foundation does. Our memories of Ecuador will include hearing the intense whirring of rainbow-colored hummingbirds’ wings, seeing yellow-billed toucans sitting in nearby trees and watching shy Jocotoco birds emerge from the dense forest, living freely because people cared enough to protect them.

CURRENCY:  US coins and bills are exclusively used in Ecuador.

WHEN TO GO:  Even though Ecuador is on the equator, the high altitude of Quito and Cuenca results in some chilly weather. The dry season (summer) runs from June to September and the wet season (winter) is from October to May.

Doug lives in Carlsbad, CA, and has lived, worked or travelled in 80 countries. Doug has been doing photography since 1968, with an emphasis on his passion for nature and travel. He has an international MBA from Thunderbird, a degree in Accounting, and has been a financial adviser for over 10 years. Three times in his life he have set off with a backpack and travelled for over a year with an open agenda. Those special travel experiences gave him a tremendous sense of joy, peace and aliveness. You can read more about my journey at http://www.hansentravel.org/