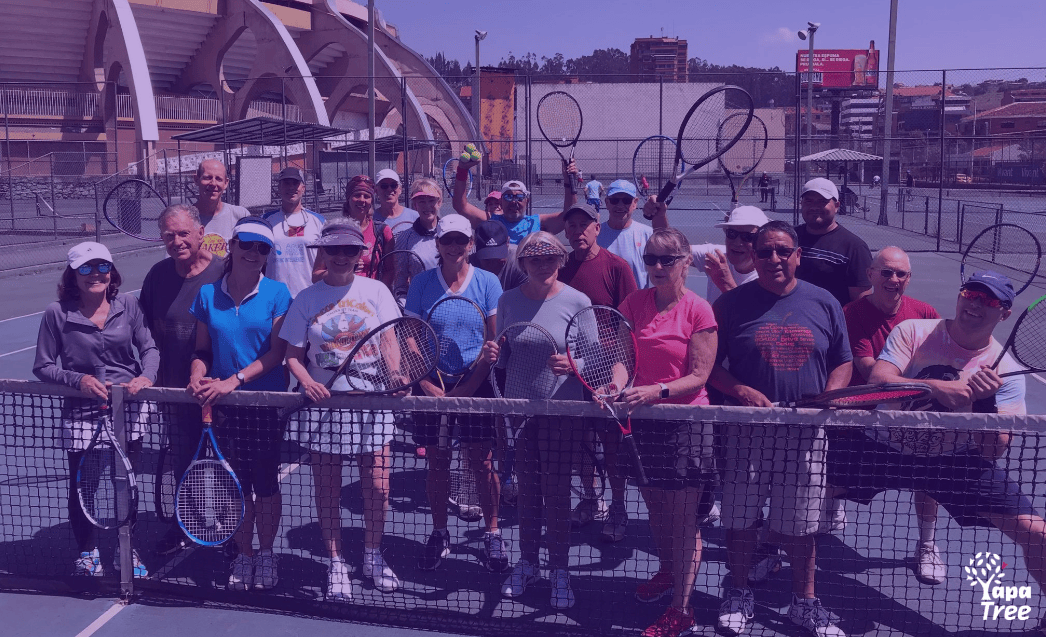 Tennis in Cuenca – Loving the Game at 8,500 Feet Above Sea Level 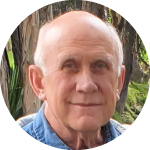 Tennis is a beloved sport enjoyed by millions of people around the world. According to tenniscreative.com, an estimated 87 million people, or 1.17% of the global population, play tennis. This is impressive considering that tennis is a challenging sport that requires instruction, training, and practice to be able to play at a beginner level.

And unlike sports such as swimming, running, or bicycling; tennis must be played against an opponent – and the opponent must be of comparable ability for their tennis match to be satisfying. Those who are committed to playing tennis must not only find a facility where they can play their sport, but also find fellow tennis players that will be worthy opponents or doubles partners. Fortunately, Cuenca has solutions for these challenges facing tennis enthusiasts.

Where to play tennis in Cuenca

There are three sites open to the general public for playing tennis in Cuenca. The largest is in the Jefferson Perez Quezada Coliseo complex on Avenidas 12 de Abril and Unidad Nacional. The Coliseo complex has five lighted outdoor courts – three for singles tennis and five for doubles. They can be rented for $4.00 per hour and are open from 6 am to 10 pm daily (except holidays). Reservations are accepted, but many players simply show up and play on the courts tha  are available upon their arrival. Instruction is available at the Coliseo, and the head pro there is Angel Rigoberto Inga.

Over on the east side of Cuenca, there are some courts available to rent on the campus of the Colegio de Ingenieros Civiles de Azuay (Azuay College of Civil Engineers, or CICA) on Avenida Cumanda, across the Rio Tomebamba from the Hospital del Rio. The CICA courts are also lighted and are open until 10 pm nightly. Farther out of Cuenca is the Circulo Militar del Austro, northeast of Cuenca. An additional option for those with the means to pay the substantial initiation fee and monthly dues, is the private Cuenca Golf and Tenis club on the city’s far west side.

Connecting with other tennis players in Cuenca

The need to connect expat tennis players in Cuenca with each other led to the formation in 2011 of Tennis in Cuenca, a group mainly of expat tennis players. The group meets Tuesday and Thursday mornings from 9 am to 11 am at the Coliseo tennis courts. Currently, about 12 to 14 expats are regular players in the group, which for the last nine years has been led by Ken Lucero, who moved to Cuenca with his wife Roz from northern California in 2012 and has been playing tennis since he was 15 years old. Lucero says the Tennis in Cuenca members have a range of skill levels and countries of origin.

Their focus is recreational and social rather than competitive and they pride themselves on their inclusiveness. The only fees to participate in Tennis in Cuenca are $2.00 per session, which covers their court time. All players must bring their own equipment

Beginners are welcome if they are taking lessons and the group can refer beginners to instructors if necessary. In the first hour of each session, members play against someone at an ability level comparable to their own, but in the second hour players are matched against a more seasoned player so that the less experienced player can learn from their opponent. Lucero says a number of participants have significantly improved their games through the opportunity to hit against someone of a superior ability level.

Tennis in Cuenca gives back to the People of Ecuador

Occasionally, after some of their twice-weekly morning sessions, the group retreats to Sabatino’s Garden Restaurant on Av. 3 de Noviembre for lunch. These visits led to a friendship with Sabatino’s owner Mauricio Bernal, a former tennis player himself that sparked a new dimension and secondary purpose – to give back to the people of Ecuador. Bernal says, “I started helping 30 children and now there are 350 in the Molleturo area, near the border with Cañar. In addition to bringing toys and bags of candies and cookies for the children, we also bring clothes and groceries to the elderly every December.” Since learning of Bernal’s annual gifts, Tennis in Cuenca has contributed each year to help defray the costs of the gifts, using surplus funds from their membership fees. Their contribution this year was $250.00.

Helping a young player pursue her passion for tennis

Earlier this year, the members of Tennis in Cuenca found an additional way to give back that is in sync with their own passions for tennis. Darshan Montesinos, the pro of the Cross Tenis academy with locations at the CICA courts and the Circulo Militar, told Lucero about Sisa Ganman, a ten-year-old girl from the city of Cañar who has been playing tennis for four years and training with Montesinos for three of them.

Montesinos explains how Sisa started to play tennis and how she found her way to the Cross Tenis Academy. “At age four, when Sisa was visiting a store in Cañar with her father, out of the many items of sports equipment items available there, she chose a racket and ball to take home. She restlessly hit the ball inside their house for a couple of years until her dad decided to find her a tennis academy. Since there are none at Cañar, they came to Cuenca. She first started training at the Coliseo academy, but after a few months moved to Montesinos’ Cross Tenis Academy.

Sisa makes the two-hour round trip from Cañar to Cuenca five days a week. Since beginning her training with Montesinos, she has moved from Cross Tenis’ Beginners Division into their Competition Group Training. In October of 2022 won a national tournament in girls doubles for her age category. Montesinos says, “Sisa has a huge backhand and the drive to go with her courage and ambition to become the best player in the country. I believe she can achieve that in a couple of years.”

Yet, talent, courage, and ambition alone aren’t enough to make a champion. One also needs money to pay for equipment, clothing, training, tournament entry fees, and travel to tournaments around the country. So, the members of Tennis in Cuenca have been contributing to a fund to help Sisa cover her expenses. They set up a bank account in her name into which members can deposit funds directly into it for her use. Lucero says the members, like Montesinos, believe Sisa can accomplish great things as a tennis player.

“We plan to support Sisa as best as we can for as long as we can and help her achieve her full potential. We even have dreams of helping her compete internationally, possibly by helping her earn a tennis scholarship to one of the American universities with tennis programs that are often launching pads into the professional tour.“

Cuenca’s tennis enthusiasts are of all ages and abilities

Another Cuenca tennis player who has achieved recognition is Andrés Vázquez, who will be competing with eight other players in a deaf category in January at the prestigious Australian Open in Melbourne. The Australian Open is for professional tennis players and is one of the four “Grand Slam” tournaments across the world. (The other three are the US Open in New York, Wimbledon in London, and the French Open in Paris). This is the first time a major tennis tournament has offered a deaf players category. Vasquez, who plays at the Coliseo, will be travelling with Montesinos to Melbourne for the tournament in January.

Yet, most every day at the Coliseo and the CICA courts, one will find locals of all ages and abilities enjoying tennis for the pure fun and fitness benefits of the game. Players continue to be active in tennis despite some unique challenges to playing this sport in Cuenca. The altitude and thinner atmosphere at 8,500 feet above sea level makes the ball travel faster – considerably faster than most gringo expats are used to – and one must learn to adjust one’s game to the conditions of tennis high up in the Andes. Then there’s the matter of rain. As Cuenca has no indoor or even covered courts, some tennis dates get  cancelled because of rain and the resulting slipperiness of the courts, though most of Cuenca’s rain falls in the late afternoon so play earlier in the day is less likely to affected by it. Regardless, tennis enthusiasts of Cuenca continue to love and play the sport here, and young people continue to find their way into it.

People interested in joining Tennis in Cuenca should contact Ken Lucero through messaging Ken on the group’s Facebook page; emailing him at [email protected], or calling or messaging him at +593 098 981 037.

Individual reservations may be made at the Coliseo by calling or messaging Zonia Falconi via What’s App at +593 099 689 3691. Payment must be made in advance through a bank transfer to reserve a court over the phone. Reservations may be made at CICA or Circulo Militar by calling or messaging Darshan Montesinos via What’s App at +593 99 004 6884 or emailing him at [email protected].

See you on the court!

John Olson moved to Cuenca from Chicago in June 2022. He followed a long career in Chicago and Milwaukee advertising agencies by moving into arts marketing and publicity in 2010. He worked at two theatres as Director of Marketing and Press while building a list of freelance clients that grew into a practice large enough to become a full-time job. Working under the name John Olson Communications, he provides marketing and public relations support to a wide range of Chicago storefront theatre companies. John continues to serve Chicago theatre clients remotely from Cuenca. John was an associate editor of the quarterly Sondheim Review, for which he contributed many articles about the work of musical theater writer Stephen Sondheim; and for 18 years was a regular contributor to the theatre website TalkinBroadway.com. A native of Milwaukee, Wisconsin, John holds an M.S. in Advertising from the University of Illinois at Urbana-Champaign and a BA in Journalism and Mass Communications from the University of Wisconsin – Madison.