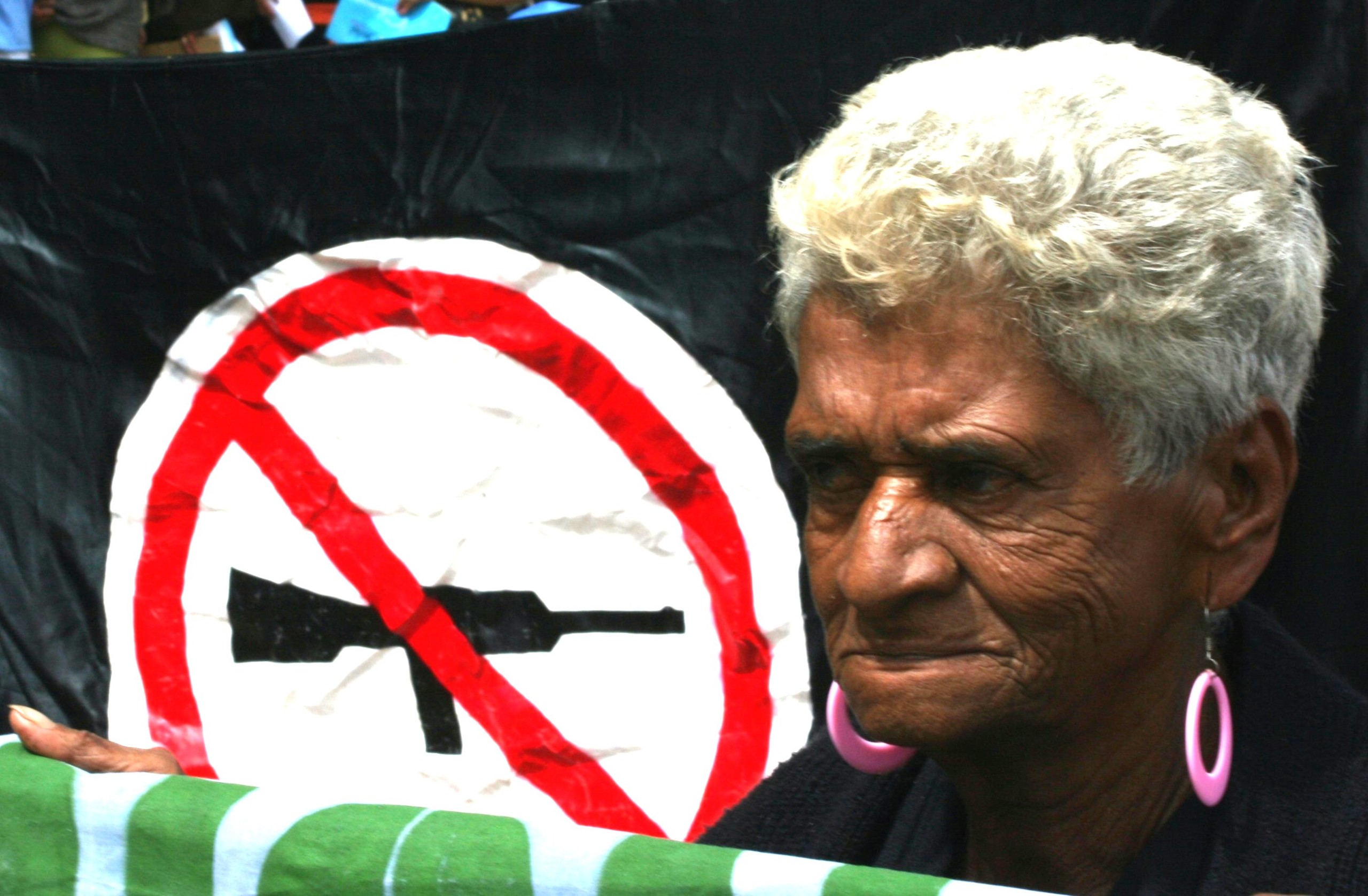 Ecuador has a history of mobilization for social change. Social movements in Ecuador have influenced governmental regimes, policies and social norms. These movements have been mostly nonviolent, unlike others in Latin America. Although many critics argue that nonviolence is a passive or ineffective means to influence change, nonviolent action is a powerful and active force. In fact, nonviolent movements are twice as likely to be successful than violent struggles. In their 2012 book Why Civil Resistance Works, Chenoweth and Stephan discovered that 54% of nonviolent movements succeed, while one only 26% of armed struggles succeed.

The prominence of social movements, protests, and boycotts over the last century in Ecuador demonstrate the cultural legacy of using nonviolence for social change. In other words, Ecuadorians continue to mobilize in the streets because it has successfully worked in the past. From historical uprisings marking the change from dictatorship to democracy, to today’s protests against Correa or oil extraction, populations of Ecuador are not shy to express their discontent with politics and policies in public forums and spaces. That is not to say that all Ecuadorians feel that they have a full right to freedom of expression, or that they government has never discouraged or punished this right, but the prevalence of social movements in this country represents a core value in using voice and action to express anger, frustration, and violations to their rights.

Ecuador has never been afraid of using social mobilization to change political regimes. The history of protests is rooted in Ecuador’s Glorious May Revolution of 1944 , which marked the transition from dictatorship into democracy in Ecuador. The uprising was initially led by protesters and armed forces, but quickly supported by diverse groups including women, intellectuals, students, Catholics, and campesinos, who organized in the streets for massive demonstrations. There were minor injuries and casualties, but Ecuadorians successfully overthrew Dictator Carlos Arroyo and democracy was established with Velaso Ibarra as president.

Ecuador experienced a stable democracy from 1979 to 1996, but this time period was also very active in mobilization after the 1982 debt crisis and the rise of neoliberalism in 1984. As Thoresen explains in her “Rebellion Without a Shot – Peaceful Conflict Management in Ecuador,” between 1990 and 2001 indigenous movements coordinated six major uprisings. The democratic revolution of the late 1990s in Latin America carried through Ecuador as the state mobilized to overthrow three presidents: Abdala Bucaram (1997), Mahuad (2000), and Lucio Gutierrez (2005). This period was defined by Ecuador’s rejection of neoliberal policies (which deepened social inequalities, structural violence, and further marginalized communities).

The election of Correa in 2006 was initially perceived by many Ecuadorians as an opportunity to move forward on the agenda of human rights, indigenous rights, development of a non-extractive economy, and declare Ecuador as a plurinational state. The future of Ecuador as a plurinational state meant that the government would move forward with inclusionary policies that recognized the social and political organization of all nationalities. Despite Correa’s leftist policies, the president continues to receive high levels of criticism from indigenous movements and environmental activists who argue that the administration has failed “to foster transformation of the structures that exploit and oppress marginalized communities,” as Marc Becker explained in his 2013 “The Stormy Relations between Correa and Social Movements in Ecuador.”

Social movements in Ecuador have had a large impact. One phenomenal example is Itchimbia, an urban land rights movement in Quito from 1995 to 2005. Itchimbia was a group of families and activists who fought for land rights in the city of Quito. Instead of simply “invading” the land, the co-op designed a plan: beautify the city, make the land functional as an eco-park, and build homes there. The strategy was met with resistance by the local government and police, the media, and private corporate interests, but the co-op was resilient and committed to a long-term struggle. Intensive trainings conducted by the movement’s leaders educated the participants on what to expect over the coming months and years, how to respond to violent threats, and the threat of outside participants seeking to reap the benefits of the co-op’s hard work. As the conflict escalated, participants used creative and diverse tactics to attract awareness, stand their ground against the local government, and demonstrate their commitment to nonviolence. For example, on two separate occasions, several members of the movement chained themselves to their temporary shelters with the slogan “not one drop of blood” and buried themselves in the ground up to their shoulders. Through sustained participation, diverse tactics, physical labor, and a commitment to nonviolence, 220 families acquired legally owned condominiums at Itchimbia.

Another shining example is the Yasunidos movement, which sparked in 2013 after Rafael Correa revealed plans to exploit crude oil in the ITT region of the Yasuni National Park (also referred to as block 43), despite his previous promises to protect the land. Yasunidos was created to directly target government policy and halt further crude oil extraction in the Amazon. The movement’s first goal was to reverse a policy change by the Correa administration through a popular referendum. In 2007 President Correa designed the Yasuni-ITT Initiative in order to protect the land and its people by halting oil exploration in the region. The incentive behind the initiative was to collect international donations in the name of environmental protection, which would compensate the state of Ecuador for the economic sacrifice of keeping 846 million barrels of oil in the ground. After a failure to obtain adequate funding in the subsequent five years, Rafael Correa announced that Ecuador was forced to cancel the Yasuni-ITT Initiative and would instead move forward with oil exploration in order to fulfill the social programs and economic growth of the state. The shift in policy sparked the mobilization of indigenous communities and environmental activists and the mission to collect the signatures of 5 per cent of the constituency (or 584,000 signatures), which would reverse the presidential decree. Yasunidos also takes upon a protective role for the environment and the indigenous populations who were most directly threatened by the oil extraction expansion. Despite the militarized zones within the Amazon, the movement’s activists entered and monitored the activity of oil companies to hold them accountable for their operations. Even in the face of retaliation and intimidation schemes by the military, the participants are able to remain calm in order to continue their mission.

The largest and most well known social movement in Ecuador is CONAIE, The National Confederation of Indigenous Nationalities of Ecuador, which is a statewide coalition representing 12 indigenous populations that advocates for indigenous, social, cultural, and environmental rights of Ecuador. CONAIE formed in 1986 with the negotiations and merging of two prominent indigenous organizations under the slogan “We have been discriminated, we are living under the same experience, let’s unite.”  CONAIE has a rich history from the 1990s and early 2000s, and within the past year has made a revival in their activism. CONAIE is internationally recognized for their strategic operations and their ability to harness resources and human capital. The movement is considered “the most powerful nonviolent social and political movement in Ecuador” and “the most organized indigenous movement in the Americas” according to Jennifer Collins in “A Sense of Possibility: Ecuador’s Indigenous Movement Takes Center Stage.” CONAIE is perceived by Ecuadorians as a movement that is legitimate, transparent and trustworthy. After decades of corrupt politicians, CONAIE is a force that liberals trust more than any political party. CONAIE’s involvement in legislative procedures, dialogue, and negotiation is tactful. CONAIE uses “uprisings” as the central tool of their activism, which come in the forms of roadblocks, marches, and their refusal to bring food to markets. CONAIE’s success as a social movement comes from a balance of speaking out, opposing, and protesting the system, and influencing change from within the system.

Current disapproval of Correa’s regime is multi-class (including indigenous, middle class, urban and rural groups) and comes both from the left and right, for different reasons. Although there were sparks of violence during 2015, the resistance is founded on the  use of nonviolent action. The majority of the protestors do not intend to impose physical harm on their adversaries — instead, they use work stoppages, road closures, and protests to effect social change.

Read More
PrevPreviousFreedom of Expression in Ecuador: The First Right To Go?
NextHow Retiring In Ecuador Saved My Poor Ass: Story Of A Economic RefugeeNext
You may also like