The comedian will bring his new Stand Up Comedy show for the first time to Cuenca.

CARLOS BALLARTA, the comedian who triumphs on the Netflix platform and the comedy channel Comedy Central, will perform in Cuenca next Saturday, February 12.

Ballarta is considered one of the main exponents of stand-up comedy in Latin America, and his popularity has skyrocketed after his comedy specials on Netflix, “El amor es de putos” and “Furia Ñera”, as well as with his recurring appearances on the comedy channel Comedy Central,

His first performance in Cuenca is part of his new tour called “Rebelde Comodino”, which began in Mexico last April. In this meeting with the public of Cuenca, Ballarta will present his new material, focused on topics such as the new model of social inclusion, millennial parenthood and his vision of the current pandemic, among others… Emphasizing especially the virtues and disenchantments with respect to his own generation, where in his view the rebellion is plagued with comfort…

Carlos Ballarta is characterized by his black and irreverent humor, tinged with a certain amount of self-criticism, with which he makes fun of politically incorrect topics, verbiage, drugs, the disabled, racism, religion, the Latin American character, etc…

Start the year off with a good laugh! Attend this Saturday, February 12th to this therapy of laughter with one of the best comedians of today, in a controlled and exclusive event for 450 people, in the spaces of the Theater of La Casa de la Cultura, where you may not feel very rebellious…but very comfortable!!!! 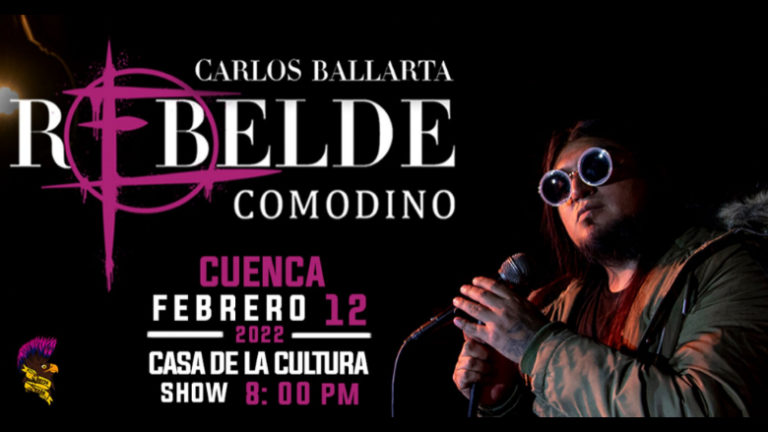