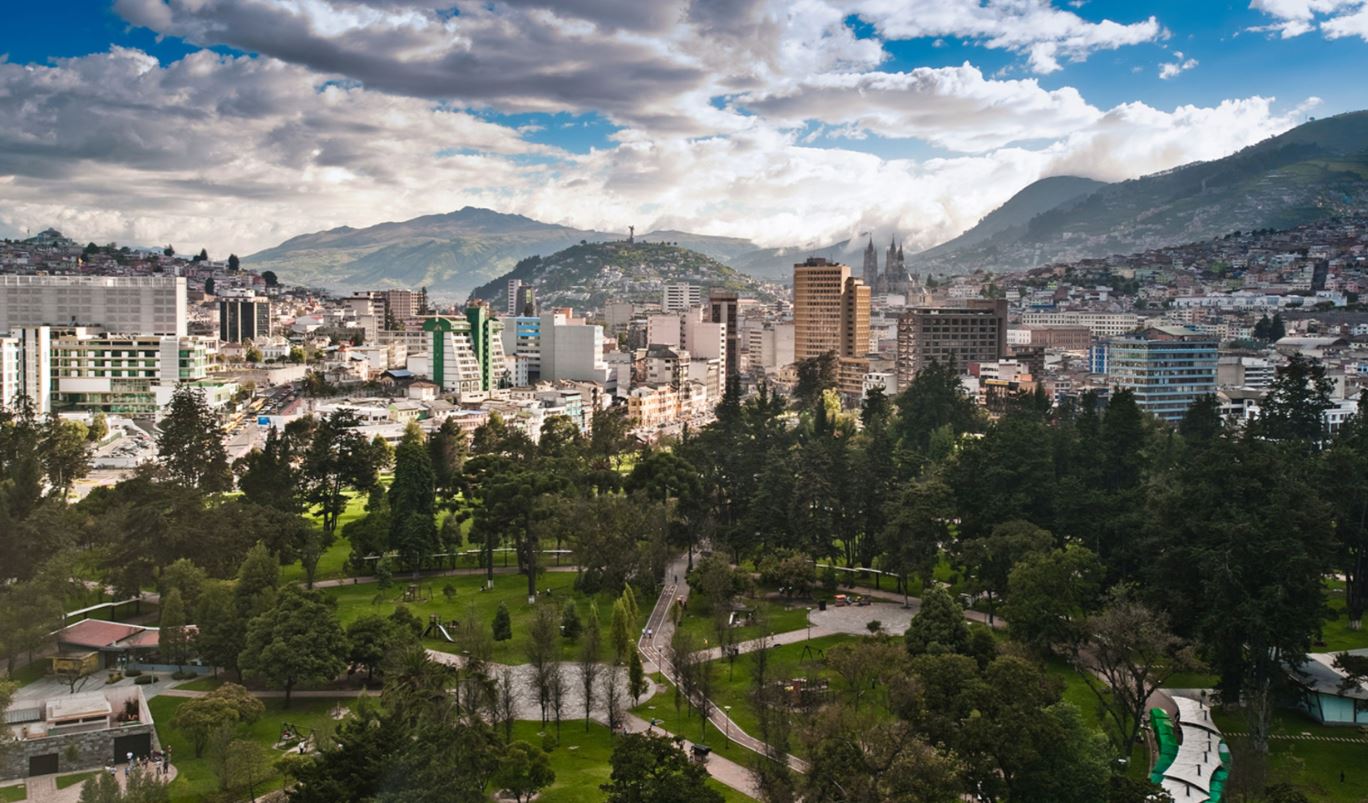 “Best of” lists are everywhere. A quick entry in Google and you will be inundated with things like “10 Best International Destinations”, “Top 20 Reasons to Move to the Sahara Desert”, etc. But as any seasoned peruser of these kinds of lists knows, there tends to be a lot of overlapping information. Look up a list of things to do in Ecuador, for example, and you will most likely see Baños, the Galapagos, and Cuenca again and again. Once in a great while, if you’re lucky, you’ll find a list with new and interesting items on it. And sure enough, you’re in luck, for here’s a novel new list of the top 11 things to do in Quito, Ecuador.

1. Tour the City at your Leisure on the Quito Tour Bus 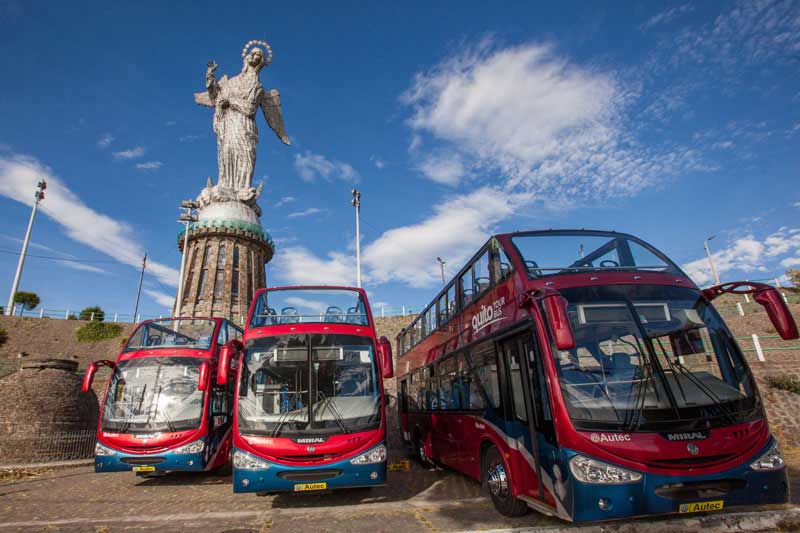 You can hop on and off at 11 different stops including main attractions like churches and museums. For someone like me who gets lost easily, it’s a low cost no-brainer. I hopped on at Plaza Foch (at the intersection of Calle Reina Victoria and Mariscal Foch in northern Quito) and spent the day with friends on the bus. We were relieved to find that the top level had a sliding canvas roof in case it rains (it did). Plus when anyone got tired, they could get off, catch a taxi back to the hotel, and it still cost less than a guided tour. For more information, go to the company’s website.

2. Ride a Bike with Biciquito Bike Share for FREE

Sometimes I just need to not be stuffed in a bus or taxi with a bunch of people asking where I’m from and why I moved to Cuenca. Biking gives me a chance for some solitude while gliding around the historic downtown without the small talk and allows me to just suck up the culture in real-time, while also burning off the tarts and ice cream I inevitably imbibe while on vacation. The bike share program is wonderful and there are plenty of places to ride on nicely paved bike paths. If you are a resident and have a cedula, sign up in advance here. You have access to 425 bicycles at 25 stations strategically located in places near the busiest tourist attractions. 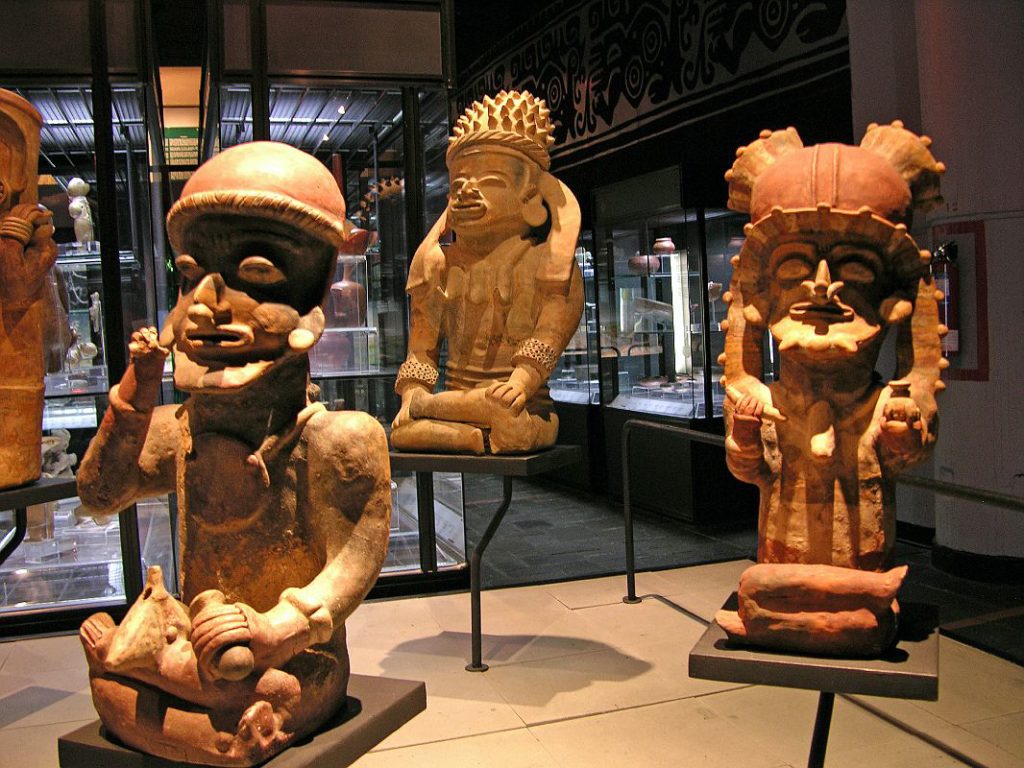 I love following the history of Ecuador, from its tribal communities to the Spanish Colonial period. You can track history through artifacts that explain how Ecuador grew from small tribes to Machu Picchu-like lordships only to be overtaken by the Spanish, who replaced the Incan culture with everything Catholic. I also like the life-size sculptures of Incans who look strangely like aliens, which started an ongoing debate with my sister who is sure “we’re not alone.” I wish I had been. For more information on this fascinating museum, click here.

4. Marvel at the Half-Ton of Gold Poured into the Iglesia de la Compañia de Jesús 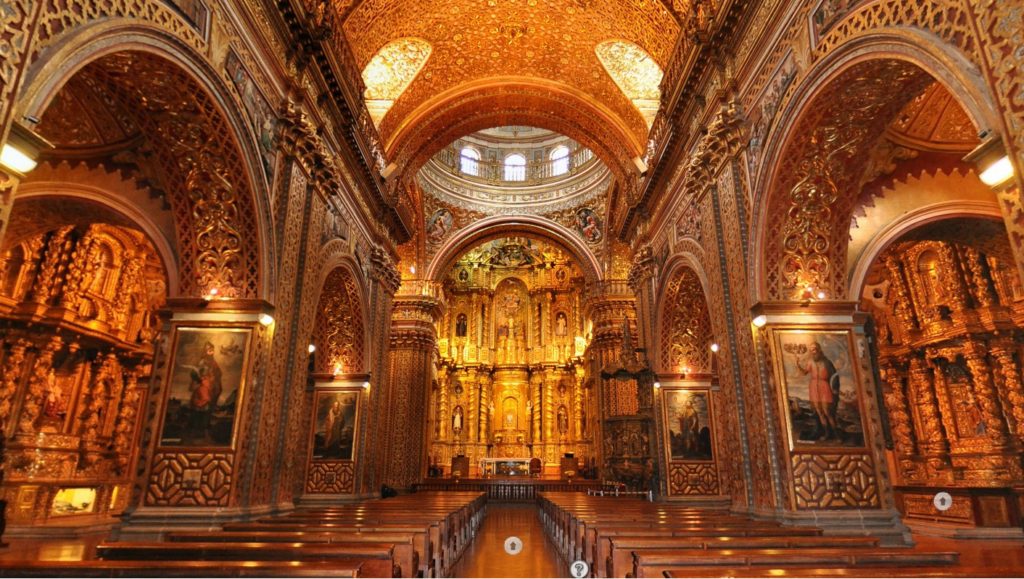 The gold literally causes this church to “outshine” the rest and is one of the most significant works of Spanish Baroque architecture in South America. Grab a tour guide, who works on tips, to learn the fascinating details behind the history of the church and about Saint Mariana of Jesús de Paredes, a rich aristocrat who, at the age of ten, made private vows of poverty, chastity, and obedience and donated her money to sustain the church. Here’s an important tip: it’s easy to get into the Church, but you can’t get out of the locked gate until the guard sees a copy of your paid entry ticket. So don’t misplace it. I have a feeling that there’s about 100 gringos locked up in the convent there because they couldn’t find their ticket.

5. Stay at Hotel Vieja Cuba Bed and Breakfast, Located in a Colonial House 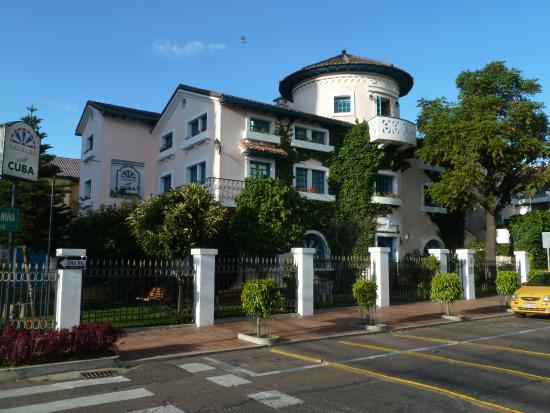 I like the quiet and safe Mariscal neighborhood, with its plethora of restaurants and bars in a “hip” part of town. You can arrange tours and pick-ups from the airport from the bilingual staff. Rooms start at $62. If you are tired after touring all day, walk two blocks from the hotel to the Supermaxi and grab wine, fresh bread, olive oil, and minced garlic for a “continental dinner” and eat outside on one of the hotel’s terraces. For more information or to make reservations, click here.

6. Get your Picture Taken at the Plaza Foch Yeah! Sign 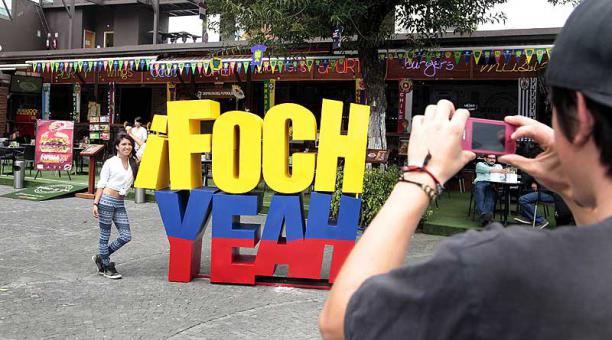 Besides the funny name, it reminds me of the trendy squares in Coconut Grove, Florida. Before you get the wrong idea, Foch happens to be a wealthy Quito family name (no relation to the Ben Stiller movie). It’s a tradition for travelers to get their picture taken with the sign. If you’re too shy to pose by the sign, then stop at one of the many bars in the plaza and down a few beers first, and then you’ll be up for this unusual tradition. But like lots of popular tourist hangouts, be careful and watch your bag. It’s party central on the weekends, but I prefer to people watch at lunch while having a hamburger at BBQ & CO.

For something different, eat at Crepes y Waffles near the Viejo Cuba Hotel (check out the menu here). It’s casual and a local hotspot, with lots of fresh salads and all types of appetizer, dinner, or dessert crepes stuffed with everything from spicy Mexican chicken to salmon and cream cheese or Oriental beef, to name a few. I had the Thai crepes and a dessert waffle filled with ice cream, chocolate, walnuts, and strawberries. Then I rolled my overfull stomach into the back of a cab and headed back to the hotel delightfully satisfied.

But if you’re too tired to go out to dinner or want to take a lunch on the bus, just a few blocks away from the hotel is a fantastic, casual eat-in or take-out restaurant called Cafetería Heladería. I like to stock up on their ham and cheese sandwiches, strawberry tarts, and chocolate pastries, take them back to the room, turn on the TV, and enjoy a peaceful night in before I wake up early for more touring. 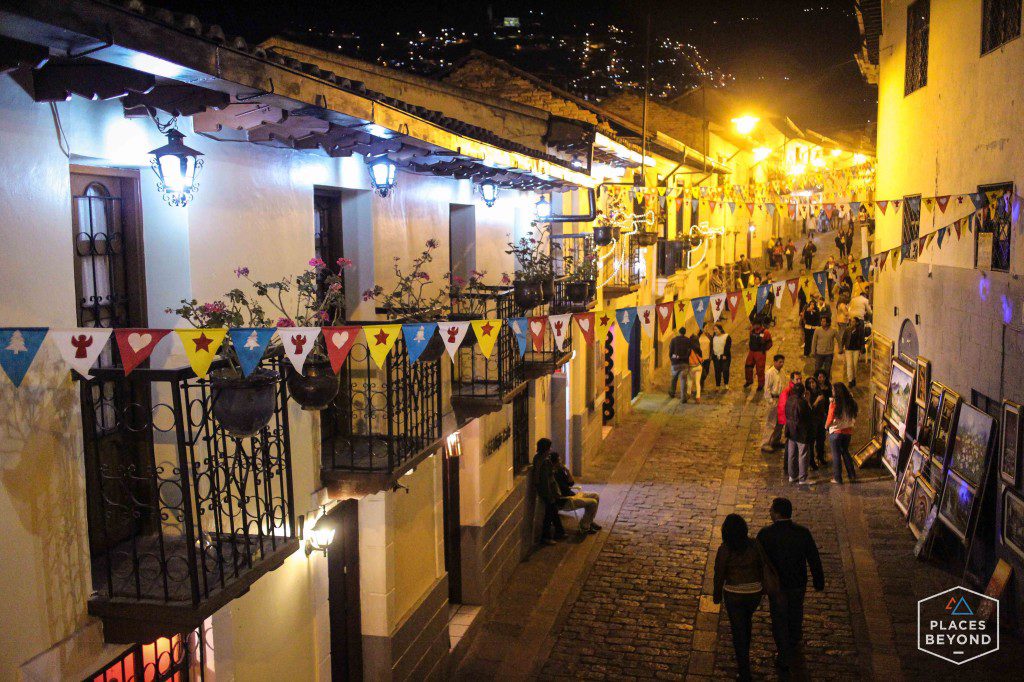 I’m not a shopper, but I totally loved strolling around the La Ronda section of town, which is like walking down a cobblestone street in Nice, France. It was pouring down rain last time I was there, so I dunked into one of the many coffee shops and warmed up with some “caffeine” con leche before heading out to shops where artisans demonstrate how they make their crafts, making the shopping more interesting and inviting. 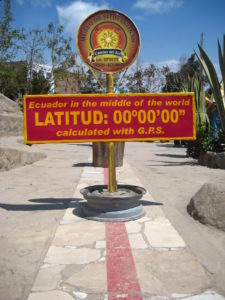 9. See the Real Equator at the Indigenous-run Inti Nan Museum

I like to zip in and out of the Mitad del Mundo (for more information, click here), the world’s most tourist-friendly place to access the Equator which has a large monument marking the location. But don’t be fooled–the researchers were off by about 200 yards, so skip down to the Inti Nan Museum that houses the real Equator, and engage with lots of fun physics games that prove that 0’0’0’ was found by the tribes, not the French Geodesic Mission.

10. Hang Out at Plaza Grande

There’s nothing like eating pumpkin donut holes from street vendors and watching protestors who bring their own salsa band to dance to while holding up signs. The dancing protestors didn’t exactly scare the tourists or the guards at the Presidential Palace. Everyone kept beat and agreed that Ecuadorians know how to turn a protest into a party. But even when the protestors are absent, Plaza Grande is a great place to sit and take in Quito’s vibrant culture.

11. Go to the Oxygen Bar at the Top of the Teleférico 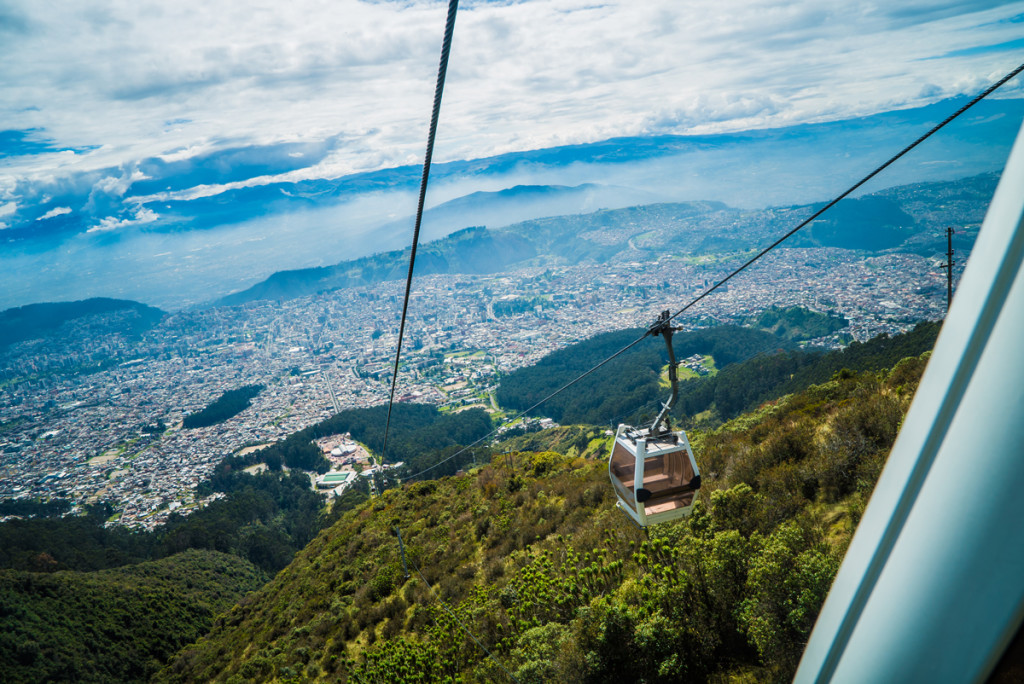 I took my 85 year old mom on the Teleférico (an aerial tram) up to the 13,000 feet Cruz Loma viewpoint, located on Avenidas Occidental and Fulgencio Araujo. I was a little afraid of how the oxygen deficit would affect mi madre, but she rocked out at the oxygen bar on the mountaintop, which she enjoyed as much as the view (it was cloudy). It’s $4.90 if you have a cédula to ride the tram and, besides snorting oxygen ($25 for ½ hour), there are lots of scenic overlooks and nature paths to explore with great views of Quito.

Have you been to Quito? … Did I miss any highlights or must-dos?  Do you have more recommendations for other travellers? Please let us know and leave a comment below.

Read More
PrevPrevious“Papa Noel” or “Plata Noel”? Twelve Questions for Expats this Christmas
Next10 Tips to Survive the “Most Wonderful Time of the Year” in a Foreign CountryNext
You may also like