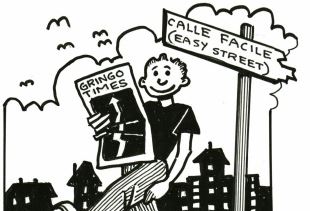 Living In Cuenca Ecuador: The Good, the Bad, and the Ugly

I think I should also remind you that THE REAL WORLD is a serious, satirical, and sometimes surreal opinion column.  Most columns in GringoTree tend to be the upbeat “ain’t Cuenca Ecuador a wonderful place to live.”  For the most part I tend to agree.  As a matter of fact my wife and I have often discussed that Cuenca Ecuador will be our home base for as many of the 50 extra years I actually achieve.

I recently watched Serge Leone’s movie with the same title as this week’s THE REAL WORLD article.  My memory (never trust it) tells me it was the film that launched Clint Eastwood’s motion picture career that continues in high velocity some 50+ years later.  I doubt this article will make me a writing star for the next 50 years although I do plan on living until I am 128.

Despite all the great things about living in Cuenca Ecuador there are some real issues that seldom get examined in public. Today’s column will discuss some of those issues.  Some good, some bad, and some ugly.

I am convinced at their very core, Ecuadorians are friendly, welcoming people.  The ones we know, and they number in the dozens, are honest, hard-working, and naturally mellow as long as they are not behind the wheel of a car.  Sure we have a sometime problem with the Ecuadorian sense of time.  My wife more so than me at the moment.  However, the longer we live here, 10 years this year, the more we learn to go with the flow.  Does it really matter whether a party starts at 7:00 or 8:00 or whether a workman shows up in 30 minutes or an hour?  Not in the larger scheme of life is my conclusion.

With a few exceptions, which I will cover later, Cuenca Ecuador is a beautiful place to live.  The sky is a fantastic pallet of constantly changing blues, grays, and reds thrown in at dawn and twilight.  The mountains are not just fantastic to look at, they offer wonderful places to walk and ride.  There is nothing more soothing than contemplating the rushing waters of the Rio Tomebamba after a rain storm in the mountains while the dog makes up her mind where to do her business.  Yes, I carry and use a plastic bag.

I ride buses, cabs, and walk every day.  The buses are inexpensive, dirty, ill-repaired, polluting chambers of the highest order, and usually driven by men who have not yet learned how to shift gears.  The drivers have obviously been given schedules that can be met only if they practice for their next career, driving at Le Mans.

Years ago I attempted to deal with the issue of bus pollution in Cuenca Ecuador.  The diesel fumes contribute to myriad lung diseases, and they slowly destroy the many limestone facades in El Centro.  And trust me, if the problem is not corrected, the bus fumes will eventually destroy the tourist industry and contribute mightily to a reduction in the expat population. The irony is that every bus could be converted to natural gas for something in the neighborhood of $150.

I know natural gas is not a miracle solution to the problem of pollution, but it is a step in the right direction.  The real answers lie in a 10-year conversion plan to electric buses or even more revolutionary to buses that run on compressed air.  Don’t laugh, they both exist.

The cabs are less of a problem but they, too, could be converted to natural gas for very little money.  They could also be replaced over the next 10 years with electric or air powered systems.  All that needs to be done is to start small with every cab that needs to be replaced.  Instead of a new gas guzzler, simply purchase an electric car.  Even better, start converting the existing 3,000 taxi cabs to six passenger vehicles powered by compressed air.  Think that’s a crazy idea? Ask Tata Motors, India’s large car manufacturer, why they purchased the exclusive rights to manufacture air cabs, cars, and buses in India.  Remember, world peace and a world free of pollution begins with me and you one step at a time.

As I stated earlier, Ecuadorians are among the friendliest, laid back people in the world…until they get behind the wheel of a motor vehicle.  I don’t care whether it is a motorcycle, car, or truck.  Once behind the wheel, they become self obsessed kings of the road.  God (or whoever else rules the universe) forbid if you think pedestrians have any rights of way.  I am not sure what the Transito Policia are supposed to do?  Obviously it is not to protect the thousands of pedestrians who take their lives in their hands every time they cross the street.

Finally, for today, the last “bad” thing about Cuenca Ecuador is dog crap.  Yes, I know there are new laws mandating that owners clean up after their dogs. However, I have no idea who is responsible for enforcing this law.  We live in a very nice Westside house.  One of us, or the housekeeper, walks the dog three times a day, seven days a week, 1,095 times a year for six years.  That totals 6,570 times so far.  We always carry and use a plastic bag which gets deposited in the garbage.

In those six years we have never seen another dog walker, an exclusive, illusive phenomenon, pick up after their dog.  I am not saying they are not out there.  I am just saying we have never seen one.  Perhaps Happy Dogs and the other good works folks who are dealing with spaying dogs could also provide “Dog Crap Clean Up” starter kits with plastic bags and written instructions how to pick up dog crap.  Also, I suggest the street cleaners, who do yeoman jobs sweeping the gutters, also begin to sweep the sidewalks as well. 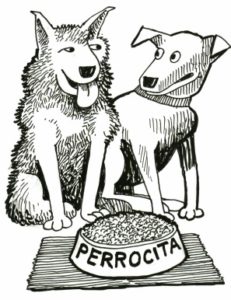 “Personally, I couldn’t do my business with a human waiting plastic bag in hand! “

I’ve already discussed vehicle pollution.  There is another kind of pollution that has a big impact on tourism and my eyesight.  The city needs an intense campaign to teach people, starting with the kids, to throw their trash, no matter how small, into a trash can.  Aha, you say, where are the trash cans?  There are a few.  However, what the city government needs to do is lead this cleanup campaign by installing bolted down trash cans, three to a block on each side of the street in El Centro and four on each corner for the rest of the heavily populated areas of the city.  Sound like overkill?  Maybe!  But I figure if I ask for the moon I might get one on every block.  That would clean up the “eye pollution” that is swamping parts of the city (every market district and most parks) as well as just simple neighborhoods.

Finally, we come to the sidewalks.  The main reason we can’t truly enjoy the beauty of the city’s architecture is the terrible condition of so many sidewalks.  You have to keep your eyes down to be sure you don’t step in a hole or broken payment while glancing up to be sure you don’t run smack into a hanging garbage holder.  Granted ,there has been a significant effort to install new sidewalks in sections of El Centro as well as a new ordinance that requires garbage racks to automatically snap up to a vertical position that don’t impede the sidewalk.  What has been accomplished is just a drop in the bucket of what needs to be done.  Let’s hope that in those sections of the city where Tranvia is ripping up the streets they will not only repair the immediate sections of street but also the sidewalks along the entire route.

That’s it for today.  I am off next week for the USA.  The next two issues of THE REAL WORLD will be in the capable hands of our cartoonist Glen Birbeck, who will entertain you with his experiences in Krakow, Poland and other European areas that lure him to visit this summer.

Bill Bushnell currently lives in Cuenca, Ecuador. He is an award-winning professional theatre, film and television director/producer/writer; a disaster-relief consultant for the US government; an international investor; and the co-creator with Leita Hulmes of the South American Fund for Education (SAFE) which focuses on the education and development of poor, bright kids. In his spare time he travels the world. His life’s beliefs are simple: “Change and indeterminacy are my security blanket.” “Truth is a pathless land.” “World Peace begins with me.” “Live life one day at a time because the only living time is NOW!”

Read More
PrevPreviousHow Retiring In Ecuador Saved My Poor Ass: Story Of A Economic Refugee
NextWhy I Left: My Journey To Cuenca Part 1Next
You may also like