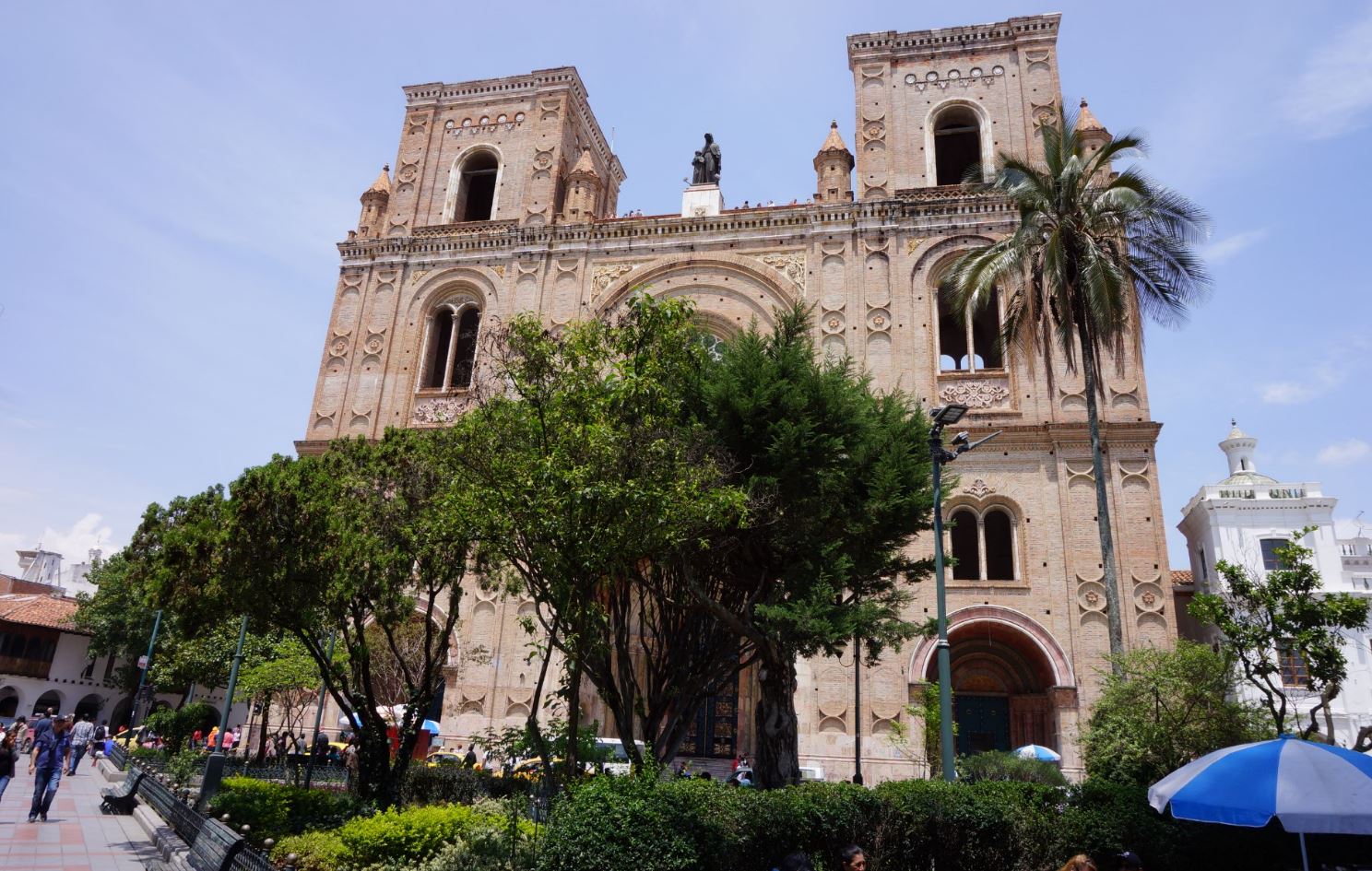 [color-box color=”gray”]Every visitor or resident of Cuenca would be remiss if they didn’t experience first-hand the beauty and history that is found in the most recognizable image for Cuenca, the blue domed, Cathedral of Immaculate Conception. In this article we will cover:

The Basics; including location & hours of operation
A Brief History of The Cathedral
The 5 Top Points Of Interest including;

Join me today for a written walking tour of the Cathedral as I explain the top 5 things you’ll see, in the order you’ll see them, as you explore one of Cuenca’s greatest cultural treasures and landmarks[/color-box]

The Cathedral of Immaculate Conception, also known as the “New Cathedral” has become one of the most visited spots in Cuenca. It is located in front of the Central Plaza, Parque Calderon, at Benigno Malo and Mariscal Sucre Street. It’s large and dominating structure, texture and color is clearly visible from all angles of the city including the outskirts.

A Bit Of History… 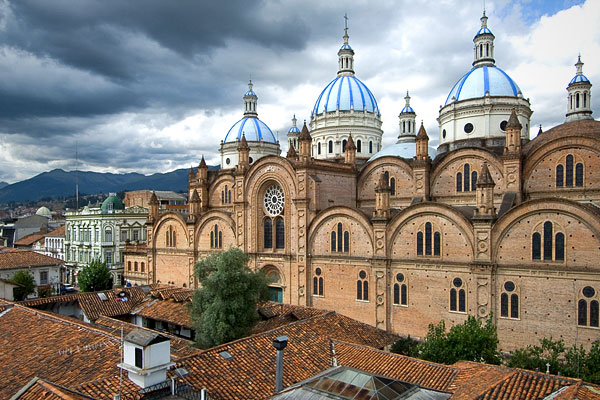 For those who are drawn to the three domes of the Cathedral, the entrance door is located on the left side within the Church. For the amount of $3, you can take a full tour of the Cathedral, including the domes. The effort of climbing the 150 steps required to reach the domes is rewarded with a unique view of the city and of the tops of the beautiful blue domes designed in the Gothic Renaissance style that protrude from the roof.

If we pay attention to the way that Cuenca is depicted in other cities or countries, the Cathedral always appears as the main symbol. It represents the largest and most important monument to Cuenca’s Catholic faith and it stands as a place of worship and pride as one of Cuenca’s most valuable architectural and cultural treasures. 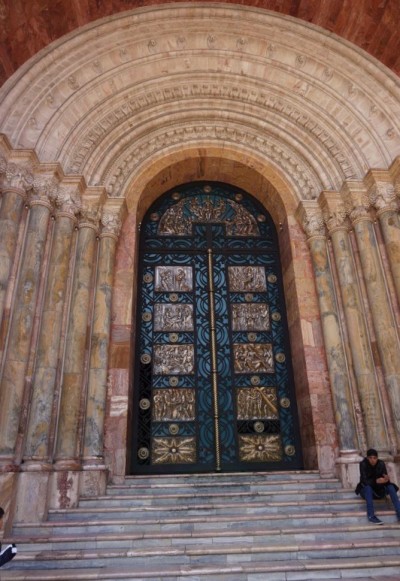 The massive central door was built primarily in the Renaissance style. This includes concentric Romanesque rings and on each of its sides, six smooth columns are positioned. The columns are made of marble and are decorated with both the busts of the twelve apostles and grape bunches which is a symbolic element for the Holy Eucharist, frequently seen in the interior and exterior decoration of the Temple. Classic and neo classic architecture also stand out in the main door in the style of “Boveda de cañon” (barrel vault) which gives the entrance to the Cathedral a half moon shape. Its facade is impressive and its size causes an enormous impression on anyone who looks upon it.

The beautiful stained glass windows made of antique glass and colors of several ranges, adorn the Cathedral both inside and out. They were carefully crafted in Germany, (apse* and the one depicting Moses); in Belgium (three rosettes which look out onto Parque Calderon); and in Cuenca, (those of the aisles). The ones that can be seen as you walk the aisles of the Cathedral were armed with lead veins by the artist Guillermo Larrazábal and they predominate in the interior of the Church depicting religious images and symbols of the Catholic faith. 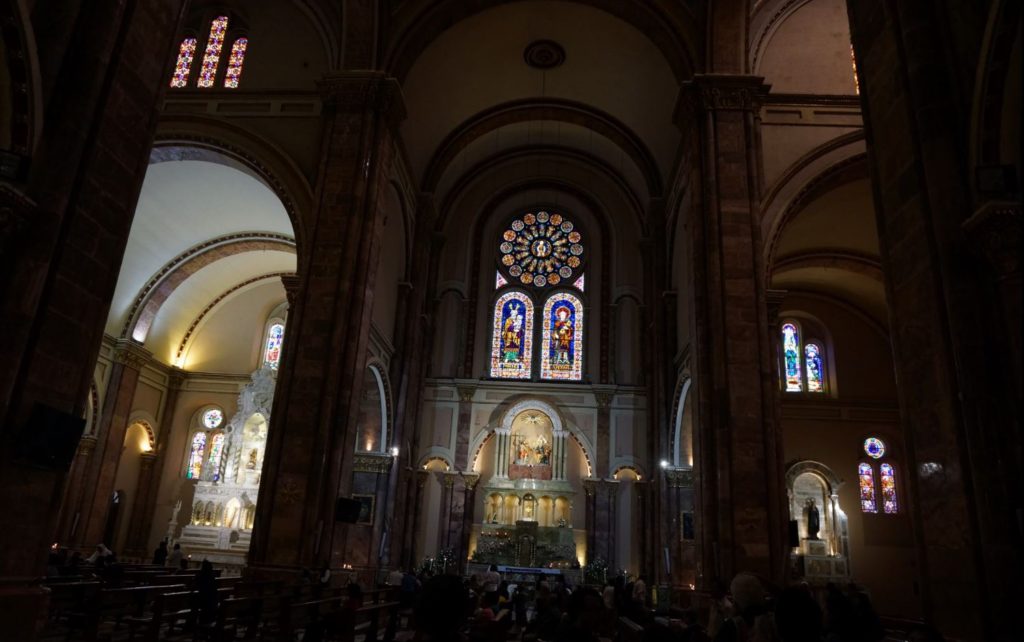 * From the Latin absis: “arch, vault” ; (sometimes written apsis; plural apsides) is a semicircular recess covered with a hemispherical vault or semi-dome, also known as an Exedra.

In the center of the temple, you will find the main altar. Its twisted columns which are made out of wood, present characteristics very similar to the one in St. Peter’s Basilica in the Vatican, as Cuenca’s altar was inspired by its complexity. While the altar in Rome kept its natural color, in Cuenca, it was decided that the altar would be covered with gold leaf which was carefully placed resulting in lasting shine and splendor that looks as though it was a recent work. Four solid Renaissance style marble bases hold equal numbers of columns, which are carved in the Baroque style.  Next, the dome of the baldachin can be seen with unmistakable elements from the Renaissance period, like the emphasis on symmetry, orderly arrangements of columns, as well as the use of semicircular arches or hemispherical domes. From the edge at the top of the dome, delicate detailing can be appreciated, depicting two victorious Angels at the sides and the symbol of the cross in the center, at its peak. The statue of Jesus Christ that stands in the center of the altar was brought by Manuel de Jesus Serrano from Europe in 1960 and it was crafted by the Spanish sculptor Rafael Palmas. Cuenca’s Cathedral is one of the few in Latin America that has a baldachin of such nature and quality, both architecturally and pictorially. 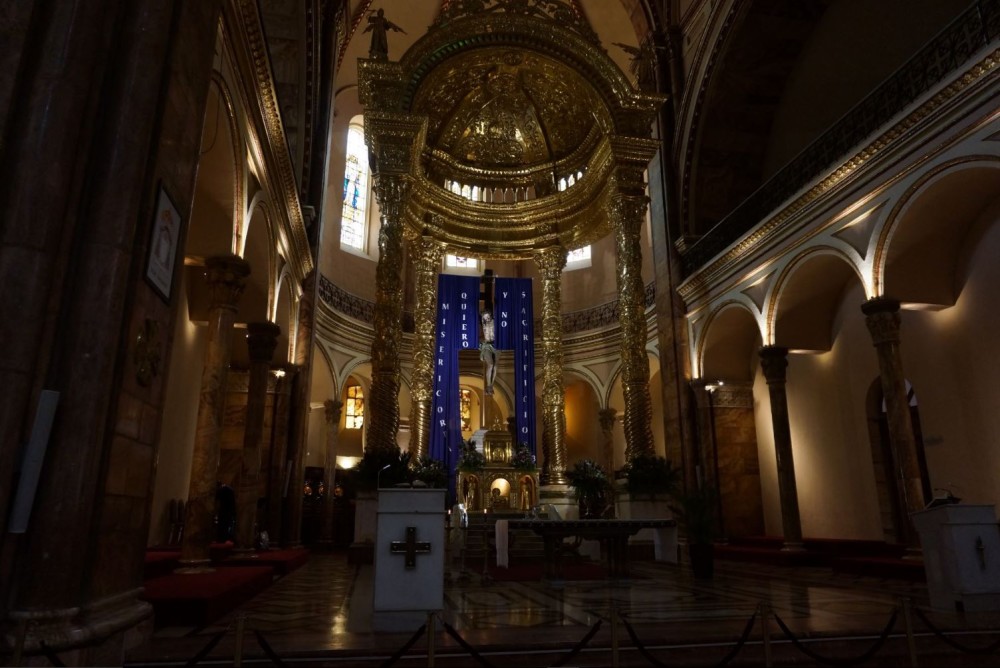 Currently, the Cathedral of the Immaculate Conception receives lots of visitors, some who wish to see the crypts that are within the Church. For those people who want to visit the Crypt, which is located in the basement area of the structure, you can find a small wooden door on the left side of the main altar. From there, 32 marble stairs will take you down to the Crypt which has been cleaned up and painted so that many tourists and locals can go and take a look inside to admire the resting place of townspeople as well as many illustrious characters like the journalist Fray Vicente Solano, the poet Remigio Crespo Toral and religious figures like Daniel Hermida, Jose Vicente Arizaga, Miguel Cordero Crespo, Tomas Toral and others. The Crypt’s construction began in 1887 but with the death of Stiehle, work was paralyzed until it was resumed in 1907. It measures 96 meters in length and 12 meters in width. According to the rector of the Cathedral, Guillermo Andrade, the Crypt was destined to be the burial place only for illustrious characters like poets, religious figures and military men but nowadays, there is only room left for priests.
Back To The Top 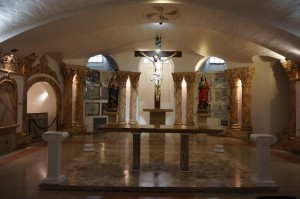 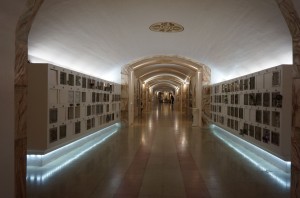 So when you visit this marvelous work of architecture, be sure to carefully admire each carefully placed stone and detail. Look for every reason why this place is often called an architectural treasure of not only Cuenca but the world, and you won’t have to look hard. The Cathedral of Immaculate Conception is truly one of the strong cultural elements that give identity to Cuenca’s community making this charming city well deserving of the honorable title of Cultural Heritage of Humanity.