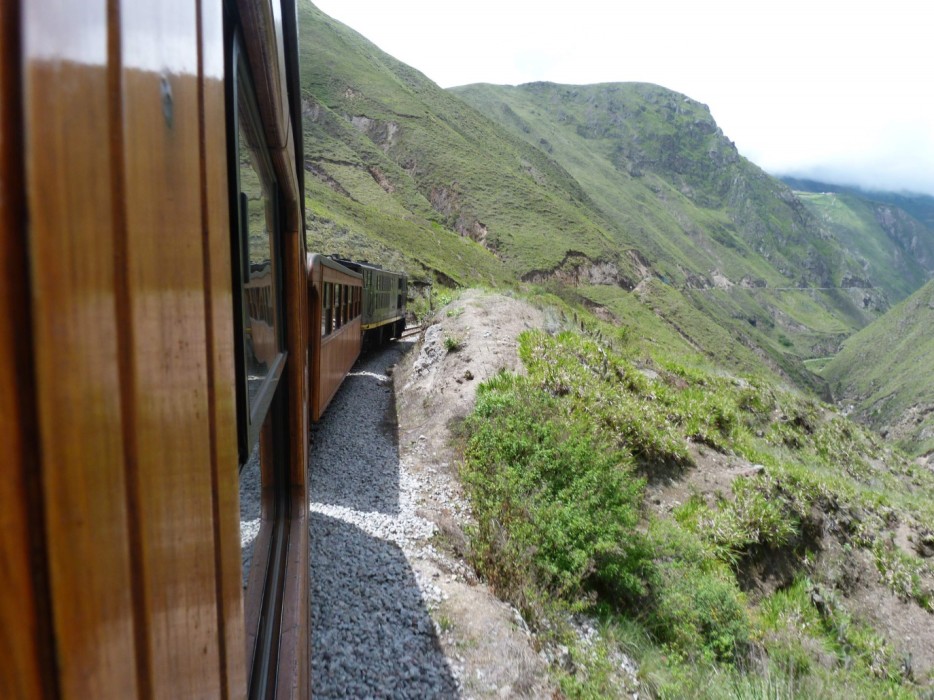 After reading that the Devil’s Nose Train ranks as one of the top 10 most dangerous train rides in the world, I decided to step outside my comfort zone and do what thousands of Ecuadorians, tourists and a few dogs have done throughout the years – ride on the train’s roof dangling my feet over the side while bracing myself against the railing.  Imagine my disappointment when I read on several blogs that around eight years ago two tourists were decapitated and another scalped by a low-hanging phone wire, causing the closure of roof top rides. Although I hoped this was only an urban legend, I was still more than happy to sit inside one of the newly renovated train cars where I could enjoy the exhilarating descent without worrying about headless bodies flying off the roof spoiling my adventure.

The train ride can still inspire a bit of white knuckles when the train hugs the tracks along dramatic cliff drops.  But probably the most harrowing thing about the train is not the ride itself, but making sure you get on the train in the first place.  Following are tips on how to get tickets, transportation, which station to start from, route itinerary, and what to bring.  Don’t let the fact you won’t be scrambling across the top of the train like Butch Cassidy stop you from this extraordinary trip.

History confirms the Devil’s Nose deserves its name.  Work started in 1899, with about 3,000 Jamaicans and 1,000 Puerto Ricans brought in to work on the project. The number of men that died during construction is estimated at around 2,000 making this work pretty much a deathwish.

The goal was to connect the railroad from Quito to Guayaquil and the greatest obstacle to building the railroad was a near-vertical wall of rock, known as El Nariz del Diablo (The Devil’s Nose), which connects Alausi to Sibambe (mid-way between Quito and Cuenca). The engineering solution was to carve a series of tight switchbacks out of the rock, which allowed the train to descend 500 meters by zigzagging ahead past a junction, then backing down the next section, before going forward again to get trains down the rock face. 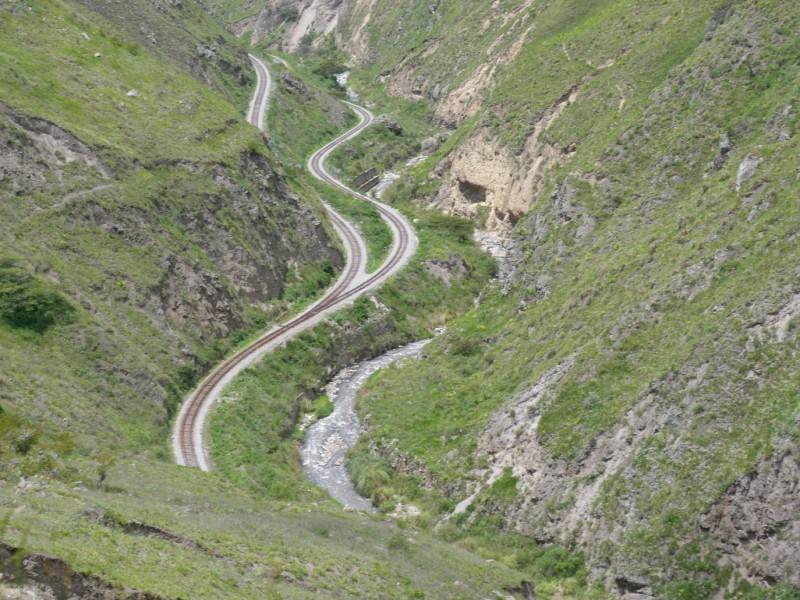 Even during the 1990’s, when the train tracks had fallen into disrepair, visitors still gathered to ride atop of the Devil’s Nose train as it slowly crisscrossed down the mountain.  Now, the tracks have been renovated and the 19th Century train cars have been refurbished as part of the restoration of Ecuador’s rail network.   Although the ride is safer now, the view is, well, to die for.

Scenery – The train travels alongside rocky ravines and cascading streams; straddles canyons and bends around mountains curves and passengers can lean out the windows to take pictures as the train zigzags down the rock face.  The ride takes forty five minutes to get to Silambe, where a light lunch is served, then heads back.  We took the 8am train to try to catch the sun, as it gets cloudy as the day progresses.  The entire trip takes 2 1/2 hours (including breaks).

The Train – The red, steam-driven locomotive has an old-time whistle that warns passengers that take off is imminent. The carriages have cushy seats and there’s plenty of space to roam around in the car.  Because the windows can be opened, you don’t have to worry about reflections or dirt spots messing up your photos.  At points, the train winds around curves so tightly that you can take a picture from the back of the train of the front of the train as it snakes along.  Don’t worry if you don’t score the preferred left-side seating, as most of the time people are standing up taking photos and don’t mind sharing window space.

Devil’s Nose – There’s a stop along the way where you disembark to take pictures of the Devil’s Nose where English-speaking guides help point the mountain top out to you and explain the history.  There are roped off areas where you can take lots of scenic pictures while learning about the brave souls who built the tracks. 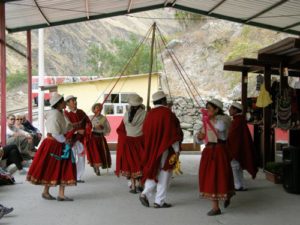 Dancers and llamas – Indigenous dancers welcome you at the Silambe stop – and they are the real thing… this is not a Disney-fied experience.  They invite visitors to take a spin with them, but if you aren’t a twirler, you can spend time shopping at the small outdoor market.  There’s also a museum on the construction of the rail line.  Locals bring a llama and donkey for children to sit on for photos for a dollar.

2.) Where to get information

There are loads of blogs, websites and articles on Devil’s Nose, but in my opinion the best website to get official information from is http://trenecuador.com/en/home/.  The site includes a great timeline with detailed history of the railway, description of eight route options stretching from Quito to Duran (near Guayaquil) and north from Otavalo to Salinas, lists departure times and prices, a pay cart to purchase tickets and vital trip information like emergency alerts (ex. Cotopaxi warnings for tourist planning train trips at this time).  You can call them at Ecuador 1800 TRENES (873637) USA 888 LUX RAIL (5897245) or you can follow them on Facebook at https://www.facebook.com/TrenEcuador.

Other sites I found helpful were http://www.ecuadorrail.com/trains-of-ecuador/devils-nose.html and of course, the obligatory TripAdvisor and Lonely Planet.

3.) How to buy your tickets

You can buy train tickets online at http://trenecuador.com/en/home/ or at any train station, but it’s easiest (especially on short notice) to buy through a local travel agency (especially in Cuenca).  Tickets sell out early, and have assigned seating.  If you want to sit together on the correct side of the train (the preferred seating for views) then try and get your tickets a few weeks in advance.  I was up against a one week deadline to get tickets, so I went through CAZHUMA TOURS & LANGUAGE SCHOOL CIA LTDA, Telephone:  (593) 7 283 2052, Cellular: 0999749227, www.cazhumatours.com,  Padre Aguirre 9-40 entre Gran Colombia y Simon Bolivar, Cuenca – Ecuador.  They speak English and I got my ticket vouchers in a couple of days.  You can pay them via PayPal or with cash (they did not take credit cards at their office when I purchased my tickets).

4.) Information you need to purchase your tickets

When you are buying tickets you will need to verify the following information for each passenger riding the train:

Full name (as listed on passport)

I carried all this information including my cedula and passport when I went to the travel agency and they logged each passengers’ name into the computer in order to purchase the tickets.  Many local travel agencies offer trip packages to Devil’s Nose for groups at a lower cost than traveling privately.

First, make sure you are getting on the right train.  If you want to go on Devil’s Nose, you need be on the Alausi to Sibambe (Pistishi) route.  Following is the current itinerary but also check when buying your tickets for any changes.

6.) How to arrange transportation

The most important thing is don’t be late as it takes approximately 3 to 3.5 hours by private van to get to Alausi train station from Cuenca.  You are required to arrive 30 minutes before the train leaves the station – as it waits for no one!

Because I am a chicken-little thinker, I didn’t want to take chances and booked my transportation through Cazhuma Tours as well.  I was traveling with my sister and 85-year-old mom and wanted to make sure we had bathroom stops and weren’t crowded onto a bus.  The driver had a nice size van and picked us up at our house at 7am (we were catching the 11am train) and we got to the station in time to verify our tickets, grab a cup of coffee and board the train with ease.  It cost us $165 total for 4 people for the private van plus $25 each for train tickets.

Catching the bus, especially if there’s time to spare, is a cheap but slower way to go.  Alausi’s bus station is located on 5 de Junio, just three blocks down from the train station along the town’s main street. The Bus from Cuenca to Alausi takes 4.5 hours, leaves from Cuenca at 5am and 2:45pm and costs $5.  Buses run throughout the day and this website: http://www.vivatravelguides.com/south-america/ecuador/andean-highlands/central-highlands/alausi/alausi-overview/getting-to-and-away-from-alausi/ does a good job of running down departure times and costs from many cities throughout Ecuador to get to Alausi.

At the Alausi train station, there’s a small outdoor café where you can grab some coffee and snacks, but nothing  elaborate.  I suggest carrying your own food and water for the van/bus ride to Alausi because you’ll have limited time once you get to the train station.  The train ride only lasts 2 ½ hours and stops halfway at the Sibambe train station, where they serve a light lunch (almuerzo).   If you’re a big eater, pack some extra snacks and drinks as you are allowed to carry food and drinks on board.

This is a day trip from Cuenca so no need to stay overnight.  However, I did see a mention on the trenecuador.com website that you can lodge at several of the train stations, including the Sibambe Station.

Personal documents (I took a copy of my passport and my ‘real’ cedula and they barely looked at either.My husband got by with his cedula.)

Rainwear (depending on the season)

Cash (there are gift shops)

You don’t want to be the next urban legend.

Time of trip: Two and a half hours, including about one hour in Sibambe